The Gods have spoken… no more freedom of speech!

To get something straight before I get started… I like the Warriors Forum and it’s members, a great place to get questions answered. I even like some of the Moderators… the smart ones. Well, but sadly… some Moderators are walking on the dark path of the power…

Tonight the Warrior Gods have spoken… depending on your own belief, you might call them something else, like e.g. “WSO Moderator”.

What did they say? No more freedom of speech!

Ok, let’s get to the point and I let you be the judge…

Here is the final version of my post that has been deleted from the Warriors Forum : 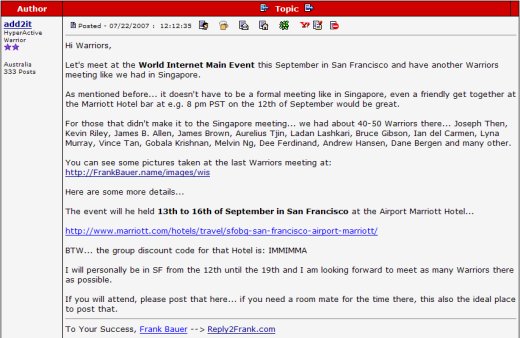 In case it’s too small… here is the text again:

Did you see anything in that post that is against Warrior Forum guideline?

I don’t, so when this was deleted, I tried with a friendly posts to get a quick reply from a Moderator (aka God) to see what needs to be changed in order to be allowed for posting.

I tried a second, still friendly tone, post… which got deleted again without any feedback.

Well, that’s when I decided to speak up a bit to get a response…

As you can see, that got a reply, just not a helpful one.

Hmmm… what does this mean?

Let me know what you think!

Update July 25th: After a little more trial and error (trying the changes recommended by commenter’s)… I FINALLY got a PM reply that was a bit more helpful from somebody with moderator rights (that is not a moderator himself)…

I replied to Michael and told him that I don’t have any intention to challenging any moderators or Allen’s authority. I asked him then what part of my message made him believe so and offered to rewrite or remove that part.

Also, regarding publishing PM’s on my blog (which are in my opinion nothing else then emails that we all receive every day) I told him that even the police can use them as evidence, so why not the receiver of such messages?

He then replied to me something that made things more clear to me… he was struck by the fact that I stated that I reposted it after it had been deleted. In his opinion, this in itself is a no no.

I told Michael that it wouldn’t be ok if the offender posts the exact same message again. If he got no feedback of the moderator and tries now a different version to get it approved, that’s ok in my opinion… better would of course be if the moderator simply tells why it was not approved, so the offender can simply learn and adjust his approach.

So, what Michael was basically saying was that the topic is banned for me because some moderator was too lazy to tell me straight away why it was removed in the first place.

But if only I am not allowed, no problem… you can simply post that topic for me. Please let me know once you did.

PS: I will I see you this September at the World Internet Main Event in SF? Looking forward to meet you in person.